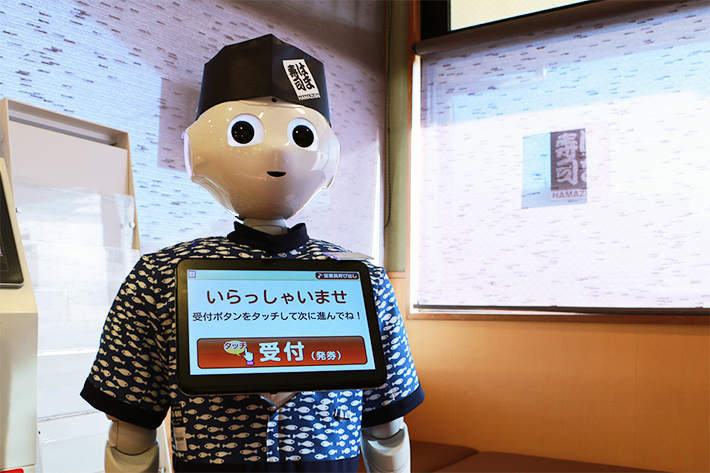 How Robot Waiters Are Solving A Labor Shortage In Japan

Walk into any of the near 500 outlets of Hamazushi, one of Japan’s top sushi conveyor belt restaurants, and you’ll be greeted by Pepper, SoftBank’s humanoid robot.

He bows and greets you, then asks you how many people are in your group, and spits out a number for you to take. When your table is ready, he calls out your number and directs you to sit at a certain table.

Pepper has been fairly common in Japanese retail outlets since it was released in 2014, but has been largely unused, with only 15% of retailers deciding to renew their contracts.

I once worked in a shop which had purchased one, and Pepper required maintenance on a daily basis after being attacked by overenthusiastic children. (see photo below)

Board reads “Pepper is having a bad day, so please leave him alone.”(Caption jokes that he must have died from overwork)

So why did Pepper work for Hamazushi?

Unlike most retailers, which purchased the robots without a clear idea of how to utilize them, Hamazushi purchased them for one particular role — the front of house greeter.

This freed up human staff to manage other tasks, helping the restaurant chain cope with a serious labor shortage and an increase in customers.

The decision to use the robot for an essential, yet easily automated role is the key to its success.

Other retailers tried to use the robot as an information clerk or shop assistant — a big ask considering Pepper’s advertised features include the ability to play peek-a-boo and make animal noises.

As you might expect, these businesses were not able to replace staff or see much benefit from the robot, and cancelled their contracts.

On the other hand, Hamazushi was able to replace one part time worker with the robot, reducing hourly costs for that role by 1/10.

They are also benefiting from the social media attention, with the CEO commenting that they would like to become known as the “Home of Pepper”.

But is the robot really necessary?

Pepper is basically an Android tablet with arms attached, and the user interacts with him through the tablet. In Hamazushi’s case, customers must select the number of people who need a table on the touchscreen, and when a table becomes available the number is shown on the screen, as well as being spoken aloud. This could be done with a tablet alone.

But having a tablet that bows and talks satisfies the need foromotenashi, the Japanese desire to provide warm customer service.

While you probably won’t see robot greeters outside of Japan any time soon, Hamazushi’s use of Pepper is an interesting example of how humanoid robots can replace a human job, while maintaining an element of warmth and humanity that cannot be achieved by a screen alone.